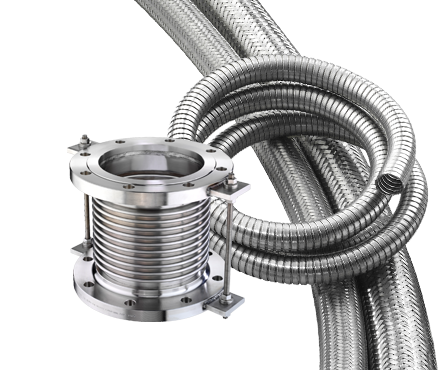 Abrasion
External damage to a hose assembly caused by its being rubbed on a foreign object.

Ambient/Atmospheric Conditions
The surrounding conditions, such as temperature, pressure, and corrosion, to which a hose assembly is exposed.

Amplitude Of Vibrations And/Or Lateral Movement
The distance a hose assembly deflects laterally to one side from its normal position, or when this deflection occurs on both sides of the normal hose centerline.

Anchor
A restraint applied to eliminate motion and restrain forces.

Annular
Refers to the convolutions on a hose that are a series of complete circles or rings located at right angles to the longitudinal axis of the hose (sometimes referred to as “bellows”).

Application
The service conditions that determine how a metal hose assembly will be used.

Armor Or Casing
Flexible interlocked or squarelocked tubing placed over the entire length or in short lengths at the end of a metal hose to protect it from physical damage and to limit the bending radius.

Axial Movement
Compression or elongation along the longitudinal axis.

Basket Weave
A braid pattern in which the strands of wire alternately cross over and under two strands (two over-two under).

Bend Radius
The radius of a bend measured to the hose centerline, as recommended by the manufacturer.

Bend Radius, Dynamic
The radius at which constant or continuous flexing occurs.

Bend Radius, Minimum
The smallest radius at which a hose can be used.

Bend Radius, Static
The smallest fixed radius at which a hose can be subjected.

Braid
A flexible wire sheath surrounding a metal hose that prevents the hose from elongation due to internal pressure. Braid is composed of a number of wires wrapped helically around the hose while at the same time going under and over each other in a basket weave fashion.

Braid Angle
The acute angle formed by the braid strands and the axis of the hose.

Braid Sleeve/Ring/Ferrule/Collar
A ring made from tube or metal strip placed over the ends of a braided hose to contain the braid wires for attachment of fitting and ferrule, and to immobilize heat affected corrugations.

Braided Braid
In this braid, the strands of wire on each carrier of the braiding machine are braided together, and then braided in normal fashion, hence the term braided braid.

Brazing
A process of joining metals using a non-ferrous filler metal having a melting point that is lower than the “parent metals” to be joined.

Butt Weld
A process in which the edges or ends of metal sections are butted together and joined by welding.

Controlled Flexing
Occurs when the hose is being flexed regularly, as in the case of connections to moving components. Examples: platen presses and thermal growth in pipe work.

Corrosion
The chemical or electro-chemical attack of media upon a hose assembly.

Cycle-Motion
The movement from normal to extreme position and return.

Developed Length/Overall Length
The length of a hose plus fittings required to meet the conditions of a specific application.

Diamond Weave
A braid pattern in which the strands alternately cross over one and under one of the strands (one over – one under). Also known as “plain weave.”

Displacement
The amount of motion applied to a hose defined in inches for parallel offset and degrees for angular misalignment.

Duplex Assembly
An assembly consisting of two hose assemblies – one inside the other, and connected at the ends. Also known as “jacketed assemblies.”

Effective Thrust Area Hose
The cross-sectional area described by the mean diameter of the hose.

Elastic/Intermittent Flexure
The smallest radius that a given hose can be bent without permanent deformation to the metal in its flexing members (convolutions or corrugations).

Erosion
The wearing away of the inside or outside convolutions of a hose caused by the flow of the media conveyed, such as wet steam, abrasive particles, etc.

Fatigue Failure
Failure of the metal structure associated with, or due to the flexing of metal hose or bellows.

Fitting/Coupling
A loose term applied to the nipple, flange, union, etc., attached to the end of a metal hose.

Flow Rate
Pertains to a volume of media being conveyed in a given time period, e.g., cubic feet per hour, pounds per second, gallons per minute, etc.

Fluid
A gas or liquid medium.

Frequency
The rate of vibration or flexure of a hose in a given time period, e.g. cycles per second (CPS), cycles per minute (CPM), cycles per day (CPD).

Galvanic-Corrosion
Corrosion that occurs on the less noble of two dissimilar metals in direct contact with each other in an electrolyte, such as water, sodium chloride in solution, sulfuric acid, etc.

Guide(for Piping)
A device that supports a pipe radially in all directions, but directs movement.

Helical
Used to describe a type of corrugated hose having one continuous convolution resembling a screw thread.

Helical Wire Armor/Spring Guard
To provide additional protection against abrasion. Metal hoses can be supplied with an external round or oval section wire spiral.

Inside Diameter (I.D.)
The diameter inside of the hose corrugation.

Installation
The installed geometry of a hose assembly.

Interlocked/Squarelocked Hose
Formed from profiled strip and wound into flexible metal tubing with no subsequent welding, brazing, or soldering. May be made pressure-tight by winding in strands of packing.

Lap Weld (LW)
Type of weld in which the ends or edges of the metal overlap each other.

Liner
Flexible sleeve used to line the inside diameter of hose when conveying a high velocity media. It also prevents erosion.

Live Length
The amount of active (flexible) length of hose in an assembly. Does not include the length of fittings and ferrules.

Loop Installation
The assembly is installed in a loop or “U” shape and is most often used when frequent and/or large amounts of motion are involved.

Mechanical Fitting/Reusable Fitting
A fitting attached to a hose which can be disassembled and used again.

Medium, Media
The substance(s) being conveyed through a system.

Misalignment
A condition where two parts do not meet true.

Offset-Lateral, Parallel
The distance that the ends of a hose assembly are displaced in relation to each other as a result of connecting two misaligned terminations in a system, or intermittent flexure required in a hose application.

Operating Conditions
The pressure, temperature, motion, and environment to which a hose assembly is subjected.

Outside Diameter (O.D.)
The external diameter of a metal hose, measured at the top of the corrugation or braiding.

Penetration (Weld)
The percentage of wall thickness of the two parts to be joined that is fused into the weld pool in making a joint.

Percent of Braid Coverage
The percent of the surface area of a hose that is covered by braid.

Pitch
The distance between the two peaks of adjacent corrugations or convolutions.

Ply, Plies
The number of individual thicknesses of metal used in the construction of a wall of the convoluted hose.

Pressure, Absolute (PSIA)
A total pressure measurement system in which atmospheric pressure at sea level is added to the gauge pressure.

Pressure, Atmospheric
The pressure of the atmosphere at sea level which is 14.7 psi, or 29.92 inches of mercury.

Pressure, Burst (Actual)
Failure of the hose determined by the laboratory test in which the braid fails in tensile, or the hose ruptures, or both, due to the internal pressure applied. This test is usually conducted at room temperature with the assembly in a straight line, but for special applications, can be conducted at elevated temperatures and various configurations.

Pressure, Burst (Rated)
A burst value which may be theoretical, or a percentage of the actual burst pressure developed by a laboratory test. It is expected that, infrequently, due to manufacturing limitations, an assembly may burst at this pressure, but would most often burst at a pressure greater than this.

Pressure, Deformation
The pressure at which the convolutions of a hose become permanently deformed.

Pressure, Feet of Water or Head
Often used to express system pressure in terms of water column height. A column of water 1 foot high exerts a .434 psi pressure at its base.

Pressure, Maximum Allowable Working
The maximum pressure at which a hose or hose assembly is designed to be used.

Pressure, Maximum Test
The maximum internal pressure which a hose can be subjected to without permanently deforming the corrugations.

Pressure, Pulsating
A rapid change in pressure above and below the normal base pressure, usually associated with reciprocating type pumps. This pulsating pressure can cause excessive wear between the braid and the tops of the hose convolutions.

Pressure, Shock
A sudden increase of pressure in a hydraulic or pneumatic system which produces a shock wave. This shock can cause severe permanent deformation of the hose corrugations, as well as rapid failure due to metal fatigue.

Pressure, Working
The pressure, usually internal but sometimes external, imposed on a hose during operating conditions.

Profile
Used in reference to the contour rolled into the strip during the process of manufacturing stripwound hose, or the finished shape of a corrugation/ convolution.

Random Motion
The uncontrolled motion of a metal hose, such as occurs in manual handling.

Safety Factor
The relationship of working pressure to burst pressure.

Scale
The oxide in a hose assembly brought about by surface conditions or welding.

Seamless
Used in reference to corrugated metal hose which is made from a base tube that does not have a longitudinal seam.

Splice
A method of joining two sections of hose.

Stress Corrosion
A form of corrosion in stainless steel normally associated with chlorides.

Traveling Loop
A general classification of bending wherein the hose is installed to a U-shaped configuration.

Traveling Loop, Class A Loop
An application wherein the radius remains constant and one end of the hose moves parallel to the other end.

Traveling Loop, Class B Loop
A condition wherein a hose is installed in a U- shaped configuration and the ends move perpendicular to each other so as to enlarge or decrease the width of the loop.

Torque (Torsion)
A force that produces, or tends to produce, rotation of or torsion about the longitudinal axis of a hose assembly while the other end is fixed.

Velocity
The speed at which the medium flows through the hose.

Velocity Resonance
The vibration of convolutions due to the buffeting of a high velocity gas or liquid flow.

Welding
The process of localized joining of two or more metallic components by means of heating their surfaces to a state of fusion, or by fusion with the use of additional filler material.