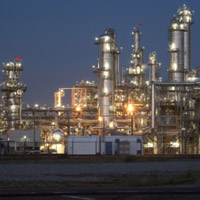 Ethylene – because its molecules have very distinctive and useful chemical properties – is manufactured in greater amounts than any other chemical. The majority of ethylene is produced using a process called “steam cracking”, a thermal process where hydrocarbons are broken down, or “cracked” into smaller molecules that are then used to manufacture more useful (and valuable) chemicals. In the petrochemical industry, two of the main feedstocks for steam crackers are naphtha and ethane.

Naphtha is primarily derived from crude oil, while ethane is more prevalent in natural gas and natural gas liquids (aka NGLs, a mixture of various hydrocarbons often co-produced along with natural gas). Steam cracking these hydrocarbons is accomplished by first mixing them with steam, then running them through tubes in a cracking furnace where the feedstock is briefly heated to very high temperatures. The cracked feedstock is then rapidly quenched (cooled) to stop the hydrocarbon molecules from being completely consumed. The resulting product streams are separated and purified, leaving valuable compounds called “olefins”: ethylene, propylene, and others. These olefins, or monomers, are then processed so they form chains of molecules called polymers – plastics with varying properties and uses. Olefins are a group of petrochemicals, because they are derived from petroleum and/or natural gas.

Before hydraulic fracturing revolutionized the way we produce natural gas and NGLs in the U.S., most steam cracking furnaces used naphtha as the primary feedstock. Because oil prices were much lower overseas, many U.S.-based steam cracking plants were forced to close, as they were simply not competitive on a global scale. This all changed when hydraulic fracturing shale formations provided inexpensive and plentiful supplies of natural gas and NGLs, which are rich in ethane. American petrochemical manufacturers are now very competitive globally and are expanding ethane cracking capacity.

Steam cracking furnaces for ethane are similar to those using naphtha. In fact, many U.S. steam crackers are designed to run either feedstock. However, the actual cracking reaction must be carefully tailored depending on the composition of the feedstock as well as the desired end product. The temperature in the cracking furnace, the residence time of the feedstock, and the quenching process used all affect the quality of the produced hydrocarbon stream. Once the feedstock has been cracked, the product stream must be purified and separated, using various processes depending on the feedstock. These furnaces must occasionally be de-coked, which requires injecting flammable gas into the furnace in order to burn residue (coke) off of the tubes carrying the hydrocarbon feedstock.

Regardless of the feedstock (naphtha, ethane, propane, butanes, kerosene, et al), steam cracking requires vast amounts of energy. In fact, it is the single most energy-consuming process in the chemical industry. Most of this energy is used to create the steam and the heat in the cracking furnaces, but energy is also required for pumps, quenching towers, heat exchangers, compressors, condensers, cold boxes, distillation towers, decoking operations, and many other processes. Because of the sequential heating and cooling of all of the different process streams, there is quite a bit of thermal expansion and contraction in the piping systems that connect this equipment.

Expansion joint salespeople must not only be familiar with the products they supply, but also with how those products work along with the rest of the components in a properly designed piping system. Accordingly, we spend a lot of time discussing piping system components such as anchors, guides, supports, and hangers in Hose Master University. Any expansion joint must be installed in a properly anchored and guided piping system in order to perform as designed. Still not sure about the performance requirements of the intended application? That’s why we’re here. Contact us today if we can help you to survey the piping layout. Call us at 1-800-221-2319 or through our website at hosemaster.com today. Let’s get cracking!