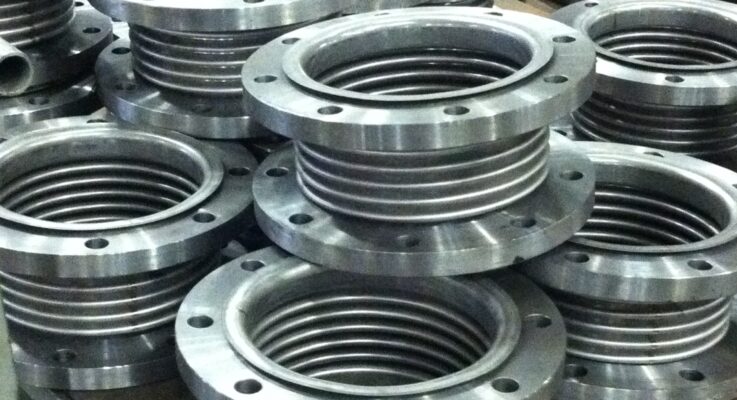 Many types of expansion devices are used in industrial applications. Why are they necessary? As piping systems heat and cool, they experience changes in length caused by thermal expansion and contraction. The amount of this thermal expansion depends on the length of the piping run, the temperature differential, and the alloy of the pipe. For example, a 100-foot run of carbon steel pipe will expand 1.82 inches in length when its temperature increases from 70 degrees F. to 300 degrees F. The same pipe would expand 2.61 inches if it is made from 300 series stainless steel.

Because this expansion and contraction can apply huge stresses to the piping system, various methods have been utilized to compensate for these thermal movements. Let’s look at some of the types of expansion devices used, and discuss the strengths and weaknesses of each type.

Pipe expansion loops must be carefully designed and installed so that the pipe, elbows, and welded joints are able to withstand the loads exerted on them. While pipe loops do not require maintenance, they take up a lot of room in the piping system layout and therefore are most often used in outdoor piping arrangements. Increasing the length of the pipe legs (H) decreases the forces exerted on the piping system.

If thermal movements are required in more confined spaces, then some manufacturers make flexible loops, which use corrugated metal hose assemblies for each leg of the loop. These flexible loops are more compact than pipe loops, but require structural supports to prevent sagging, or special drains in low points to prevent condensate accumulation. These hose loops are typically used where seismic protection is required, and should be replaced after a seismic event. Additionally, a series of ball joints may be incorporated into the pipe loops to increase the offset capability, but these are prone to leakage if not maintained properly

If there is no room for an expansion loop, then a component capable of axial movement should be considered. Two products that can handle axial (compression/elongation) movements are slip joints and expansion joints.

Slip-joints are installed in-line with the piping system, and compress as the pipe expands into them. This expansion is accommodated by a sleeve that slips into an outer shell. To prevent leakage through the slip joint, sealing materials are packed around the sleeve inside the shell. 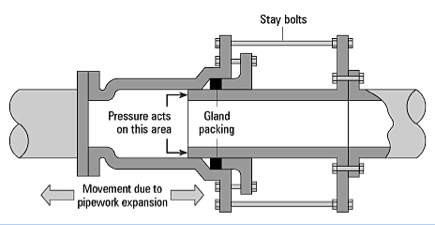 Slip joints are very rugged components, and may be designed to allow for repairs without removing the joint. Slip joints are available in many different styles and configurations. However, they have several key limitations. First, slip joints can only accommodate axial movement (compression and elongation). Any lateral or angular movements can cause the inner sleeve to bind up inside the shell, limiting its ability to absorb thermal stress. Second, the packing material must be maintained and replaced regularly to prevent leakage. Too often, this maintenance is ignored, resulting in lost revenue from leaking steam or other media. Ball joints are similar to slip joints, except they are designed to handle angular movements. Ball joints also require regular maintenance of the packing material to prevent leakage. The need for a leak-free connection that can accommodate various movements has resulted in increased demand for expansion joints.

The most configurable types of expansion devices are metal expansion joints. They consist of one or more metal bellows, which are convoluted to provide flexibility. 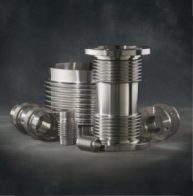 A metal bellows expansion joint combines many of the benefits found in pipe loops and slip joints, while avoiding most of their shortcomings. Like pipe loops, properly designed expansion joints can be used to absorb thermal, mechanical, and/or seismic movements in any direction, and require no maintenance. Additionally, as with slip-type joints, expansion joints take up very little space in the piping system and can be designed to handle large axial movements.

Unlike slip joints, expansion joints require no maintenance and can handle multiple movements.

As you can see, there are various types of expansion devices to accommodate expansion and contraction in a properly designed piping system. Metal expansion joints offer many benefits and are increasingly relied upon to absorb these movements. Different styles, constructions, and hardware options can be used to customize the metal expansion joint for even the harshest of applications. Not sure where to start? Contact us or call us at 800-221-2319 and we’ll be happy to discuss how we can help.

* Diagram 2 is the property of Wermac.org