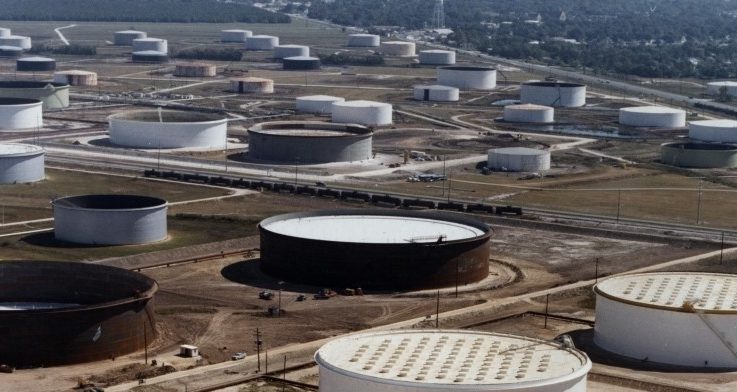 For transition between piping systems and large storage tanks, which is better: a hose or expansion joint?
Liquid storage terminals consist of above-ground tanks (sometimes numbering in the dozens) which store various crude and refined products, chemicals, and other liquids. These tank farms connect to various pipelines conveying the stored liquids to various modes of transportation, thus playing a key role in our nation’s infrastructure. Flexible connections (hose and expansion joints) must be used as a transition between the piping systems and the large storage tanks to compensate for misalignment, vibration, and thermal expansion/contraction of the piping system due to temperature fluctuations. Corrugated metal hoses are often the preferred choice for tank connections, as they offer a rugged construction that is impervious to the elements at a competitive cost. However, there are applications where metal expansion joints are better suited to handle the required movements and stresses. Let’s review the demands of the application and whether a metal hose or expansion joint is the better option.

If flexible connectors were only required to compensate for misalignment between the pipe and the storage tank inlet and outlet, then designing a flexible metal connector is easy: just calculate the amount of flexible hose required to accommodate the offset and install the assembly in a space large enough for the hose to fit without being compressed, stretched, or over-bent. However, installations are rarely this simple, and other factors must be considered. Is there vibration present? If so, what is the source? Can that vibration be minimized? If not, then obtaining vibrational data can be helpful in the design of the connector. Although metal hoses can be designed to resist the effects of system vibration, a multiple-plied metal expansion joint is much better suited to mitigate vibration’s effects. Because expansion joints are designed to function without an outer metallic braid, any possibility of braid abrasion to the corrugations is eliminated. Additionally, the multi-ply construction acts as a dampener, preventing premature vibration-induced fatigue to the corrugations.

If large temperature swings are encountered, the pipeline can actually increase in length as the temperature rises, which then may apply compressive stresses to the connectors. If not properly designed, the connectors are not able to compensate for this compression, and will fail prematurely. Know the minimum and maximum temperature range for both the media being transferred and the environment surrounding the piping system, so the flexible connector is designed to resist these temperature extremes as well as their associated movements due to thermal expansion of the piping system.

As mentioned above, these flexible connectors accommodate misalignment between the piping system and the storage tank connections, but what is often overlooked (or at least not calculated properly) is the amount of misalignment that can occur after the system is installed. Large storage tanks can often sink several inches after they have been filled with liquids, and this settling may continue over time. Flexible hoses can be offset beyond their design, which then puts excessive stresses on the hose assembly as show below:

Using a metal expansion joint as a tank connection can also solve more than piping misalignment. If tie rods are installed as shown above, the joint is also protected from any compressive stresses that may be applied to it as a result of thermal expansion of the piping system. Additionally, the design may include multiple plies to help resist the effects of system vibration.

There are many other product styles and fabrication options and accessories that may be incorporated to maximize service life of the flexible connector, thus improving performance of the entire piping system. Don’t let your customer install a hose just because it’s less expensive, readily available, and fits in the space provided. If you want help presenting this to your customer, we have a brochure available on our website that may come in handy when discussing the difference between braided flexible connectors and expansion joints. If you’re still in need of assistance, contact us and our sales staff will be happy to help.