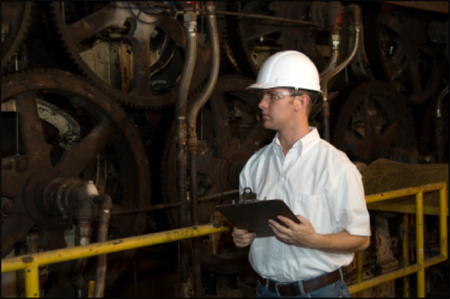 In the papermaking industry, the paper mill dryer removes the last unwanted moisture from the paper web by passing the paper between a series of rollers that are heated internally by steam. As the paper passes between the rotating dryer rolls, the heat radiates and evaporates the moisture in the paper and reduces the moisture content to between 6 and 7 percent on average. In order to connect the steam piping to and from the rotating dryer rolls, rotary unions (also called rotary joints or rotating unions) are used to connect the rigid piping to the rotating rolls. Because these rotary unions can experience some “wobble” that can occur as the rotary unions operate, union manufacturers recommend that a flexible hose (metal or PTFE) should be installed between the rigid steam piping and the rotary union.

Most rotary union manufacturers recommend that the hose is installed with some offset present, which helps prevent the hose from being stretched or compressed, as pictured in the photo above. However, as can be seen in this photo, the hoses can easily be subjected to stresses that they are not designed to accommodate: over-bending, torsional stress, or tensile pull. These stresses lead to premature metal fatigue and hose failure. Hose Master has provided numerous on-site inspections at these facilities and offers several recommendations to improve hose cycle life.

First, Hose Master’s proprietary forming process yields a more flexible hose with a higher cycle life than mechanically formed hoses used in this application. A paper mill in the US southeast will only use our Masterflex series hose for dryer roll steam supply lines, as it outlasts everything else they’ve tried.

Another way to improve hose longevity is to change the piping to allow for a 90-degree hose connection from the piping to the dryer rolls: 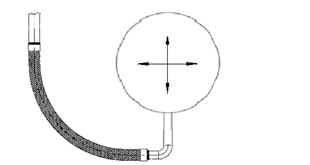 This hose is better able to compensate for movement in both the vertical and horizontal directions, as the radius of the bend will change as movements occur. This prevents the hose from being compressed as was the case in the first example. Note, however, that there is an additional stress being applied to this assembly, as it must first be bent into a 90-degree position before it can handle the required movements. The corrugations are first being bent, and then they are subjected to dynamic movements. Although this improvement will increase hose life over the hoses in the above photo, it is still not the best layout for the majority of rotary union connections. Instead, a dogleg assembly should be considered. A dogleg assembly consists of two flexible hoses joined by a common 90-degree pipe elbow, as shown here: 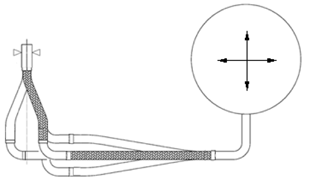 As can be seen in the above diagram, the elbow in this assembly separates two relatively straight sections of hose. Because the bend is made with the elbow instead of bending the hose, the corrugations are exposed to lower stresses and can withstand more movement over a longer period of time. 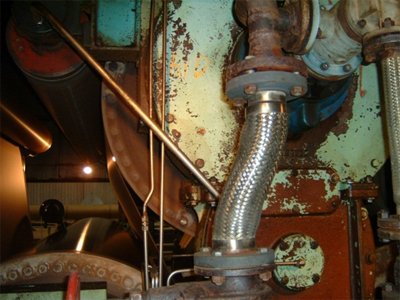 This assembly is much too short to handle the severe offset present in the system. The piping system requires some sort of modification, possibly: 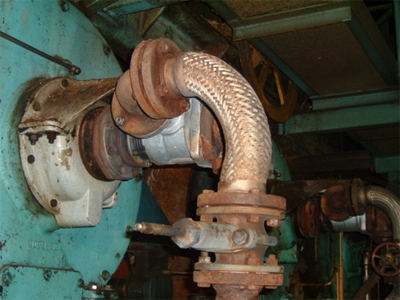 This assembly is also too short for the application. The hose is being over-bent. The third option above is the best solution.

Other possible installation variables that could shorten assembly life:

Whichever of the above assembly configurations best fits your application, make sure to follow our recommended guidelines for proper hose installation.