Lights Out – Types of Outages in Power Generation 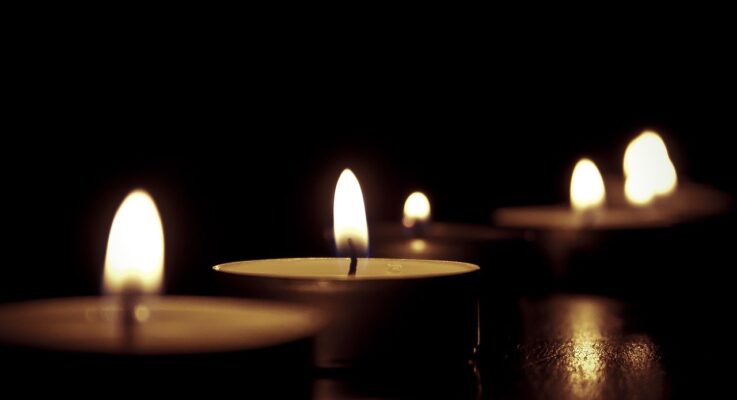 At some point, the ‘Mondays’ eventually catch up with everybody.   You might’ve forgotten your lunch, ran out of shampoo, or spilled coffee on your clothes.  We all know what it feels like to have our morning routines totally disturbed! But the ultimate “Monday” factor has got to be an AM power outage:  phone isn’t charged, getting ready in the dark, and no access to any of your appliances!  I’ve been there before, and can relate to those affected by the recent blackout in California.  It sounds like the recent pattern of outages could have been avoided with better management of the “grid” – which is what we call the thousands of miles of wire that comprise our power distribution network. But what does that mean exactly? What causes outages like blackouts and brownouts?

Hose Master operates in the industrial world – where the end-users of our products are often large facilities like power plants.  These individual utilities and power plants keep themselves up and running as much as possible through regular planned maintenance operations (MRO).  Sometimes this includes a planned outage and makes this is a very common time to replace parts and address piping components like metal hoses and expansion joints.  Despite these regular interruptions – the lights will still come on when we flick the switch.  This is all possible because (as an interconnected delivery network of producers) the electrical grid manages the balance of the flow of electricity to consumers – and when it’s working well you’d never even know it was there. This makes planned outages a breeze, but if the grid isn’t doing it’s job properly or there is a total shortage of electricity, you can get unplanned outages. 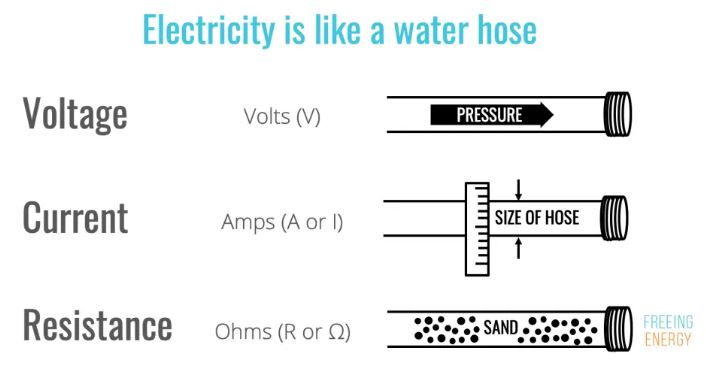 A brownout is a partial loss of power that results in the characteristic dimming of the lights that give a brownout it’s name.  Electricity flows from power plants through the grid much like a liquid flowing through a piping system – they share many similar characteristics!  In the hose world, we have flow characteristics that we keep a close eye on like pressure, volume, and abrasion that are very similar to electricity’s voltage, current, and resistance, respectively.  A brownout is what occurs when there is a sudden drop in voltage (or using the hose analogy – a sudden drop in pressure) meaning there is still some current flowing through the grid, but not enough to satisfy all of the customers it’s trying to reach. This can have all kinds of different effects on electrical appliances, some of which are much more severe than the dimming of the lights…for example, an electric appliance or piece of equipment may begin to run backwards instead of forwards!  With ample power supply and a healthy grid, you generally won’t see these issues because the grid will adjust to ensure that ample current is present to carry the electricity to its destination. Because if it isn’t – eventually you’ll get a blackout. 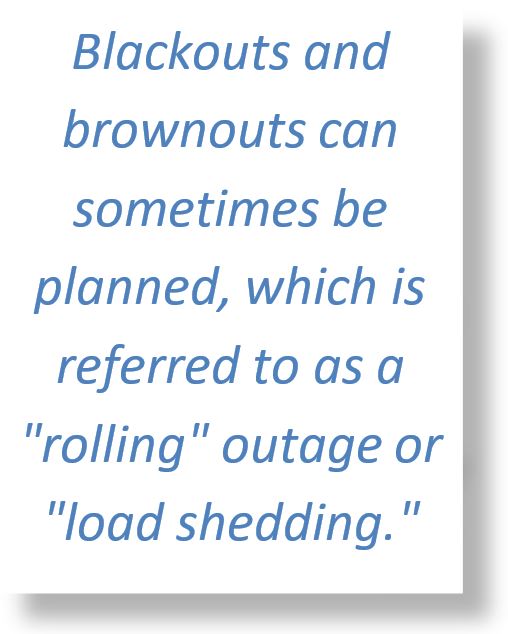 A “Blackout” is a complete, large-scale service interruption to a particular area.  Blackouts are most often the result of an unplanned power failure, and are also generally the most severe.  Blackouts often occur because of a sudden loss of power at the source of supply – catching the grid off guard and leaving many end users without electricity.   Grid operators recognize the loss of power, then either redirect various sources of surplus electricity to the affected area, or call for other generation to be brought on-line to supplement the grid.  As long as the blackout isn’t due to what’s called a “transient fault” – a physical system failure like a falling tree disconnecting a power line – the lights come back on as normal! Blackouts and brownouts can sometimes be planned, which is referred to as a “rolling” outage or “load shedding.” In these scenarios, the grid operators know ahead of time that power demands are likely to exceed the available supply and they have to make do with the power that’s available.  For example: a more remote location in a desert where power sources are less abundant and as temperatures rise so does the use of electricity for things like A/C – eventually outstripping supply.

Grid interruptions are frustrating, and the goal is to always keep everything running as smoothly as possible, avoiding unplanned outages altogether!  Hose Master has been a supplier to the power generation industry for decades, and provided flexible piping solutions to utilities that help keep the lights on in-between periods of maintenance operation. If you have a hose or expansion joint application in a power plant or are looking for application assistance, please reach out to us at our website or give us a call at 216-481-2020 and we will be happy to help!