Temperature changes have a huge impact on design of expansion joints. Let’s take a look at this in one particular industry: pulp and paper.

In papermaking, paper is made from pulp, and pulp is made using either recycled or virgin materials, or a combination of both. When producing pulp from wood chips, steam and pulping chemicals are added to the chips in a digester, where the chips are broken down into a mash that includes the pulp, water, and pulping chemicals. The pulping chemicals are then separated from the pulp and washed, evaporated, burned, recovered, dissolved, clarified, slaked, re-causticized, clarified again, and recycled. These stages are referred to as the Chemical Recovery process, and the end product (white liquor) is then recycled back to the digester to help break down the next batch of wood chips. Within the chemical recovery process, multiple operating variables must all be considered in order to prevent any interruptions in this very synchronous, interdependent system. This is an ideal application for metal expansion joints.

The liquid extracted from the pulping process is concentrated into black liquor, which is then combusted in a recovery boiler to produce the steam that is used throughout the plant. The burning of black liquor creates molten smelt, which is drawn from the recovery boiler and mixed with weak wash (a byproduct of lime recovery) in a dissolving tank to produce green liquor. The green liquor contains impurities (called dregs) which must be removed in a green liquor clarifier. 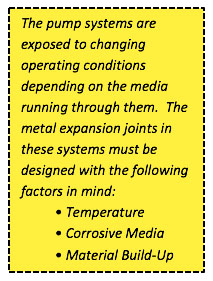 These pump systems are exposed to changing operating conditions depending on the media running through them. The metal expansion joints in these systems must be designed with the following factors in mind:

During a visit to a large paper mill, our team inspected the reversible pumps going to and from the green liquor clarifier. These pumps had metal bellows expansion joints on the inlet and outlet, but the bellows were deformed. After confirming that the STAMPED variables had all been taken into account during the design of the expansion joints, it was determined that the application wasn’t causing the problems; it was the installation.

The piping system surrounding the pumps was not properly anchored, with only small steel I-beams used for support. Over time, the I-beams bent and warped from the stresses applied not only by the thermal expansion and contraction of the pipe, but also from the pressure thrust forces exerted by the pressurized bellows. Insufficient anchoring subjected the expansion joints to movements and stresses way beyond their design, resulting in deformation, fatigue, and shortened service life. One possible explanation for this is that the thermally induced stresses were not properly calculated for each of the different temperatures of the two media. The best way to resolve the issue was to modify the pipe anchors to make them more structurally sound. Using rigid concrete columns instead of malleable I-beams helps to prevent the deflection of the anchors, thus ensuring that the expansion joint operates within its designed limits.

So we’ve seen how temperature changes can impact the design of expansion joints. In applications where temperature changes are present, it is important to define the temperature in the “cold” position, the “hot” position, and the “hotter” position. Accurately identifying the extreme high (and low) temperatures ensures the expansion joint will accommodate all thermal loads while also safely containing the pressure of the system. It is an important part of our job to help the customer identify areas for improvement in order to prevent future problems. If this sounds like too much to take on single-handedly, let us know .  Our sales team is happy to help you to cure the headaches from a green liquor hangover.