How to Calculate Proper Hose Length for Offset in an Installation

Lateral offset hose applications are one of the most commonly encountered hose installations. Whether it’s used to compensate for moving equipment, misalignment in a piping system, or as a temporary connection for an emergency or maintenance situation, lateral offsets play a big part in metal hose applications.

Calculating the appropriate length of a metal hose for a lateral offset application is not always easy, and system designers do not always use the same method. This can cause confusion when communicating among many different parties within the industry including both manufacturers and distributors. This blog seeks to explain the discrepancies between the two main formulas when it comes to calculating hose length for offset.

When a hose is installed in a lateral offset, the hose end typically must move from one side of the centerline to the other side of the centerline. But, midway through this cycle, both hose ends are in line with each other. It is when the hose is at this point where the difference between the two calculation methods becomes important.

The NAHAD formula assumes the installed hose length (“Lp”) does not change during the flexing cycle, whereas the second alternative formula assumes that the “Lp” dimension is not fixed, thus preventing the hose from being compressed while in the centerline position.

Using the standard NAHAD formula, we assume a common real-life scenario: that the hose is limited to only an “up-and-down” motion as seen below: 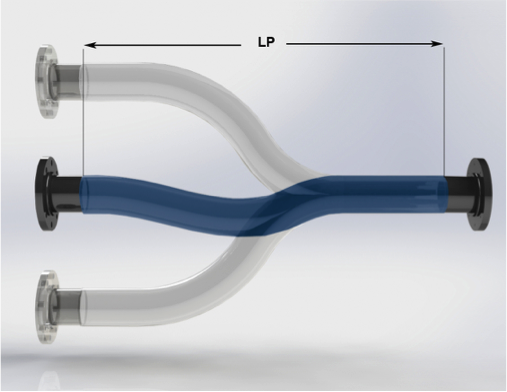 By making sure the hose stays in-plane and the fittings move straight up and down as it moves to its offset position, we can see that the ends of the hose will stay in line, and the work of the movement is handled evenly throughout the length of the assembly by all the corrugations. But, because the distance between the fittings is fixed, the hose will inevitably need to bend in the middle as the offset approaches zero. Because of this, the length of the hose must be increased based on minimum bend radius to prevent damage during this portion of the movement. The longer length assures that the bend in the center of the hose is appropriate for its size and will not see any damage that could cause premature failure. This is the method used by Hose Master.

When using the alternative formula, the movement which the hose is seeing is not dedicated to a single “Lp” dimension. When calculating in this manner, a shorter length of hose may be used due to the assumption that the fittings are not “fixed” and the hose can extend as it travels as seen below. 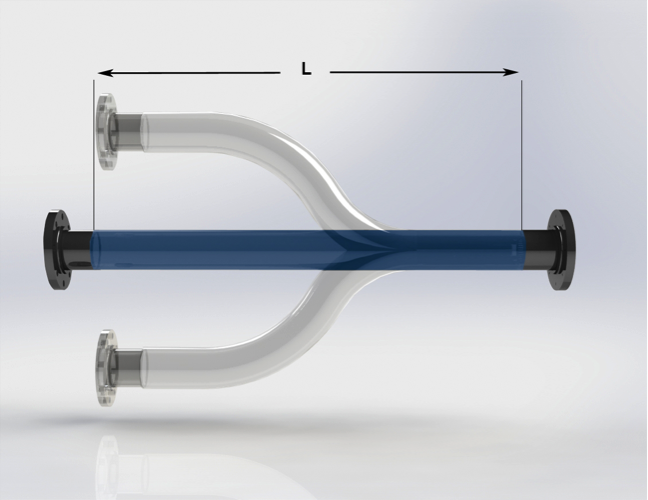 While the above scenario is certainly possible, and works in some applications, it is not the norm. This “arc” style of movement is more difficult to predict accurately; if the hose is not applied properly it can be severely strained. If a hose is put into service with a length determined by this formula, and does not have the allowance to travel in this arc movement as it flexes out of its neutral state, the hose will suffer. This change in assumption of movement from straight up and down, to moving in an arc is what allows for a shorter hose length.

If a hose length was calculated using the alternative method but applied in an environment where the fittings are fixed and cannot move in an arc, the hose may fail prematurely. Over bending, strain on the braid as it tries to extend, as well as compressing the hose axially are some of the problems the hose can see throughout the movement.

Using the correct length calculation formula is very important when designing a metal hose. Because the NAHAD method is the industry standard and applies to a typical scenario, Hose Master always recommends using that formula to ensure that the hose will achieve the best cycle-life possible. If you have any further questions, do not hesitate to contact the Hose Master inside sales department at 1-800-221-2319.